Human activity has modified virtually every facet of the biophysical environment on Earth, with profound implications for the status, distribution and resilience of biodiversity. Several major drivers of biodiversity loss have been identified, with climate change, land-use change and biological invasions being among the most important ones. Changes in climate and land use have received much attention during the last decades, which resulted in readily available scenarios. In contrast, approaches also accounting for biological invasions are still lacking despite the importance of this driver for biodiversity losses and cascading impacts on human livelihoods. Worryingly, recent research has shown that numbers of alien species are rising unabatedly in most taxonomic groups. Therefore, a thorough evaluation of plausible future trajectories of biological invasions is urgently needed to enable comprehensive assessments of biodiversity changes for the decades to come, to allow better-informed decisions of policy makers and stakeholders, and to examine the future implications of different societal responses for biological invasions.

The global temporal trend in new alien species accumulation is not showing any sign of saturation, but how will it change in the future?

AlienScenarios will, for the first time, evaluate the range of plausible futures of biological invasions for the 21st century at different spatial scales and for a range of taxonomic groups. It will combine the strategic forward-looking methodology of scenario planning with advanced modelling approaches to construct plausible global mid-term (2050) and long-term (2100) futures of biological invasions and their impacts. 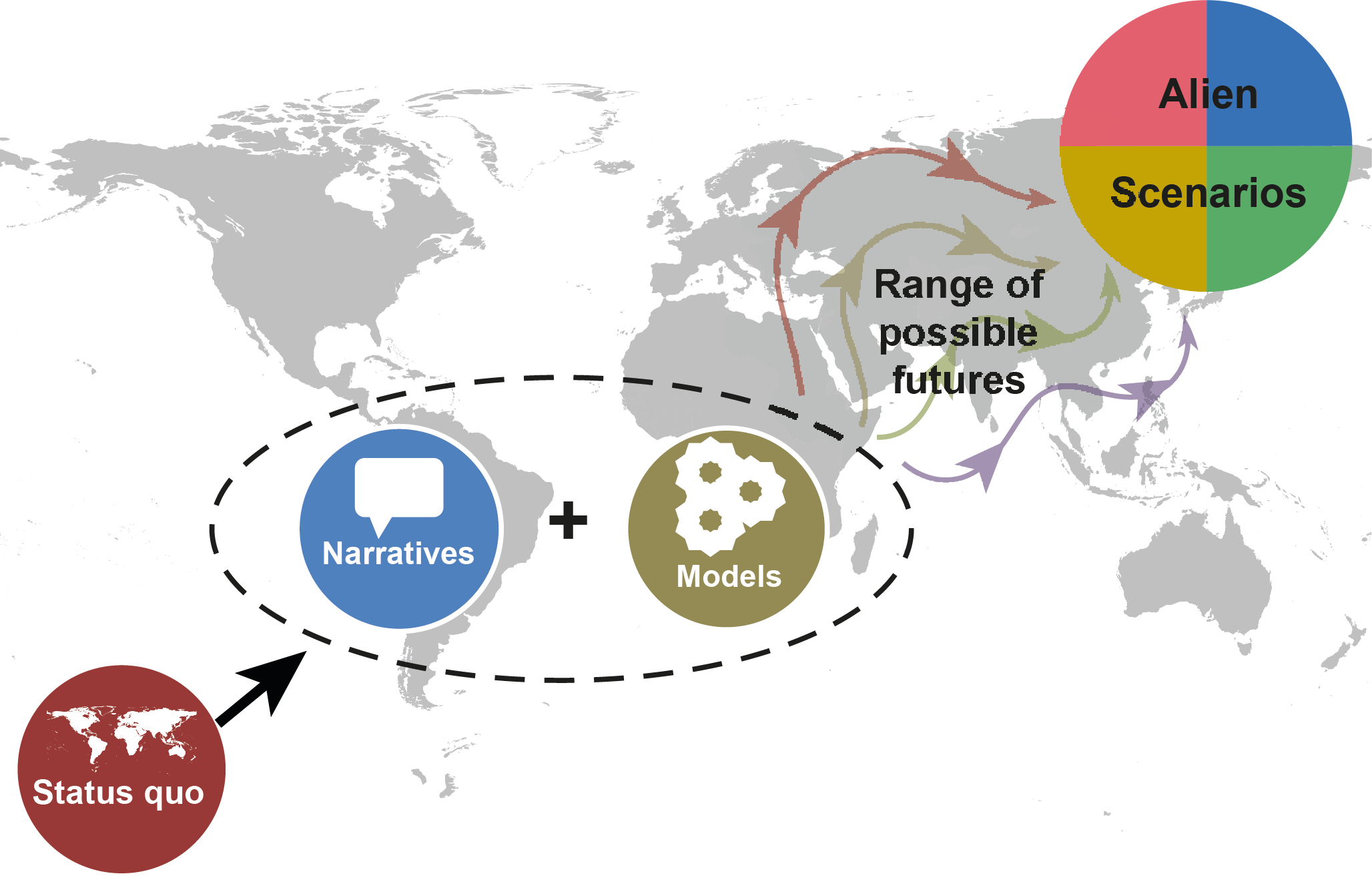 Based on the current situation, qualitative narratives are developed, from which quantitative models are derived. The combination of narratives and models define possible future scenarios of biological invasions.

The project is divided into 7 interrelated working packages for:

Project management structure and the interactions between the work packages of AlienScenarios. Shown are the seven work packages (WP), the institution of the WP lead, the integration of the WP within the project, the external Advisory Board, and the Steering Committee consisting of the WP leaders that is responsible for internal decision making. The arrows indicate the interconnectedness of the WP in terms of data, idea and material exchange.

In summary, in AlienScenarios we will quantitatively elucidate the plausible range of future invasion trajectories, provide crucially needed data for pro-active alien species management and policy, and explore options for arriving at preferred futures through the adaptation of existing policies. The outcomes of the project will be disseminated through scientific publications in open-access journals and participation in international conferences, a book or a large review, a website, a Whiteboard Animation video (3 min), and a brochure and leaflets. Local stakeholders will be involved for the local socio-ecological study in Panama. Policy-makers will also be involved for assessing the effectiveness of EU regulations of invasive alien species.